By admin in sbnation 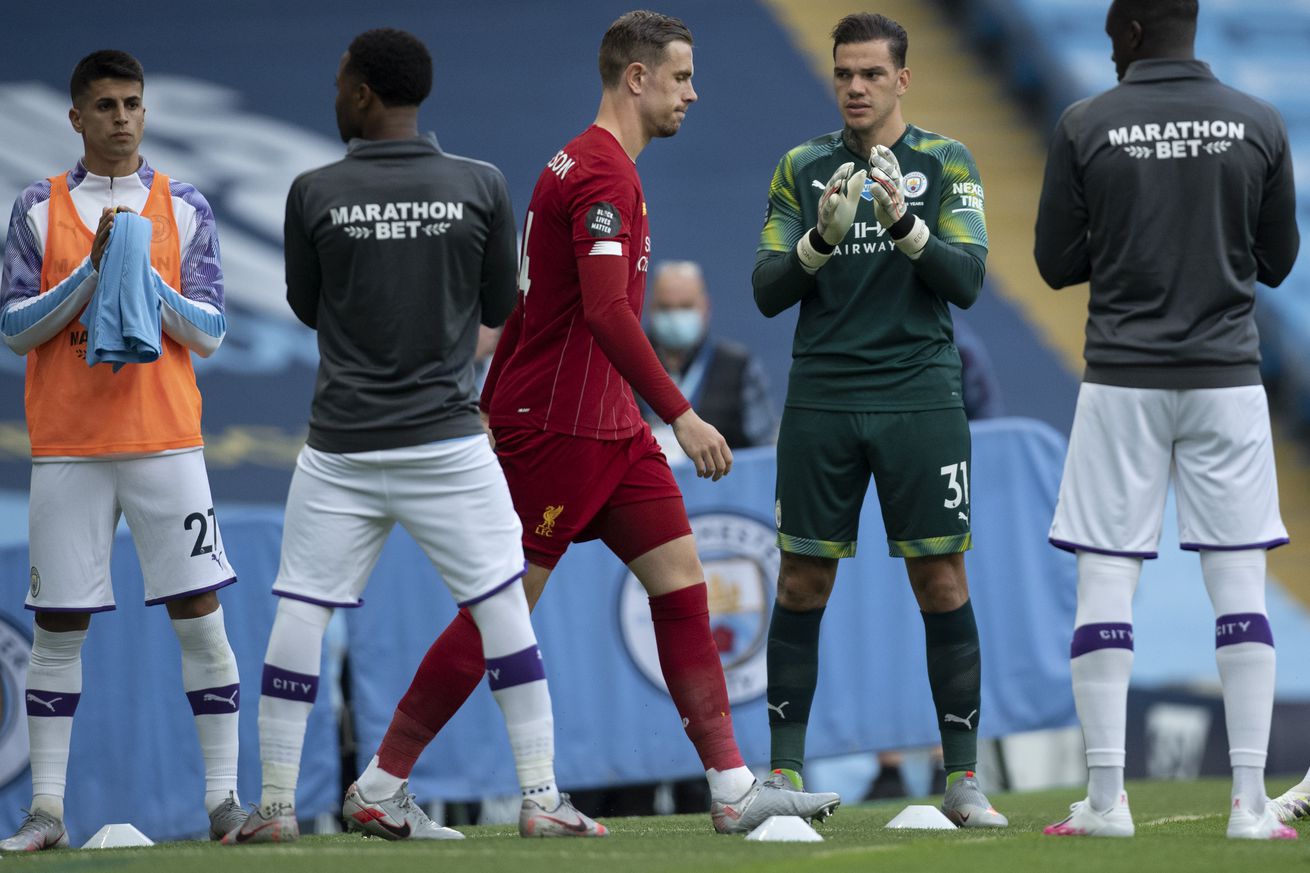 The Premier League champions are winning on and off the pitch

The view from the perch isn’t too shabby.

After more than two decades of disappointments and false dawns, Liverpool are once again a force to be reckoned with amongst the footballing elite. Charismatic manager, Jürgen Klopp’s leadership on the pitch has been matched by owners, Fenway Sports Group’s business savvy off it, as a clutch of trophies over the past few years has been parlayed into lucrative sponsorships and infrastructure investments.

It would appear that everyone wants to associate with a winner, and as current holders of the available domestic, European and world titles, Liverpool is the train onto hitch at the moment. In fact, business valuation consultancy, Brand Finance has labelled the fabled Anfield club as the fourth-most valuable football brand in the world at a figure of €1.26 billion. In their annual report on the topic, Liverpool came behind Real Madrid (€1.42 billion) Barcelona (€1.41 billion) and Manchester United (€1.32 billion) in the rankings.

The Reds leapfrogged Manchester City and Bayern Munich on the back of a stunning stretch for the club that has seen them win every major trophy on offer over the past 18 months as well strike big deals in the boardroom such as a landmark kit deal with Nike.

Brand Finance defines brand value as an estimate of “likely future revenues that are attributable to a brand…understood as a net economic benefit that a licensor would achieve by licensing the brand in the open market,” making it easy to understand the reason for Liverpool’s rise in the rankings.

In addition to the on-pitch success and the corporate sponsorships, Liverpool is growing its soft power in the modern football ecosystem. The two most recent African Player of the Year winners in Mohamed Salah and Sadio Mané both star for Liverpool while the signing of the promising Japanese forward Takumi Minamino is having the added benefit of bolstering Red’s growing popularity in the lucrative Asian markets. Furthermore, research agency Newton Insights pegs Liverpool at #2 in the “social media table”, ahead of City and behind only United, who were earliest of the other major English clubs to take advantage of the space.

Even with the club hierarchy attempting to lower fan expectations going into the transfer window amidst the pandemic fiscal uncertainties, supporters should still be encouraged by the club’s successful efforts to reassert themselves amongst the European greats. Long may it continue.

See below for a visualization of club brand value changes over time:

Super Eagles defender Chidozie Awaziem is happy to be the latest father in town after his wife gave birth to a wonderful daughter on Wednesday.

Awaziem who played on loan at Leganes of Spain during the 2019/20 La Liga Santander season, having temporarily left FC Porto of Portugal broke the news on social media.

He wrote on Instagram alongside a picture of himself carrying the baby: “I cant explain the way I feel right now…thank you God for giving me Christel, latest Dad in town.”

Awaziem and fellow compatriot, Kenneth Omeruo’s Leganes were relegated from the La Liga after playing out a 2-2 draw with Real Madrid in their last fixture of the campaign.

Sevilla are reportedly very much interested in landing the signature of Awaziem who is waiting for further decisions from his parent club, Porto concerning his immediate future.

Awaziem was rated among the best players for the season considering his superb performances after he featured 26 times for the Cucumber Growers in the Spanish top-flight.

Newly-promoted Serie A side, Crotone has rejected an offer from Udinese for Nigeria striker Simy Nwankwo.

According to  Tuttomercatoweb.com, Udinese are keen on signing the 28-year-old but Crotone are not ready to sell the highly-rated striker.

It is believed that the Calabrian club wants to retain the services of the Nigerian international so he can help them in the Italian Seria A next season.

Simy has been impressive for Crotone this term having netted 21 goals in all competitions – with 20 coming from the Seria B.

The forward is having his most prolific season as a professional after surpassing his 20 goal record he has when he was playing in Gil Vincente of Portugal.

Lazio have also been reported to have interest in the player whose contract with the Rossoblù will run until June 2022.

Simy has five caps for Nigeria and was part of the Super Eagles team that were eliminated in the group stage of 2018 world cup in Russia.

World football governing body, FIFA on Wednesday ratified a $1m grant to the Nigerian Football Federation “to protect and restart its football.”

The NFF and other member associations across the globe are all expected to benefit from FIFA’s $1.5bn groundbreaking COVID-19 relief plan after the bureau of the body approved the plan on Wednesday.

The NFF led by Amaju Pinnick can also access interest-free loans of up to $5m, according to a statement issued by FIFA on Wednesday.

It added that each member association would receive an additional $500,000 grant for women’s football during the plan’s third phase.

The massive spending plan aims to help men and women’s professional football, as well as youth and grassroots football through a system of grants and loans.

Each of the six football confederations will also receive a grant of $2m.

“This relief plan is a great example of football’s solidarity and commitment in such unprecedented times,” FIFA president Gianni Infantino said

“I would like to thank my colleagues of the Bureau of the Council for approving the decision to move forward with such an important initiative for the benefit of all member associations and confederations.”

FIFA expects to make the funds available by January 2021.

The club confirmed the move for the former Enyimba international defender on their twitter handle on Wednesday.

The flying Eagles Captain who only joined the team last summer had first team opportunities difficult to comeby and only featured in seven league games last season.

The club has now decided to let him on loan in order to get enough playing time under his belt.

“Ikeowum Udoh Utin was loaned to Bnei Saknin, the left back defender joined the Israeli premier league newcomers in order to accumulate playing time and he will be under the supervision of Maccabi Haifa. The Club wishes him all the best”, the club in a statement on the Twitter handle.

Udoh was the captain of the Nigeria’s Flying Eagles that failed to impress at the last FIFA U-20 world cup in Poland.

He made his senior international debut for Nigeria in 2018.

Nigeria striker Junior Lokosa has parted ways with his Club Esperance of Tunisia, the club confirmed.

The club said in a post on their social media handle on Wednesday that the Nigeria international has ended hi spell at the club.

Lokosa joined the club in winter 2019, had his best time in the first half of 2019 before an injury slowed down his progress at the Tunisian club.

The former Kano Pillars forward went down the pecking order after Esperance decided to bring many strikers into the squad.

The 26-year-old managed two goals in 11 appearances for Esperance but won the CAF Champions League and Tunisian league title with the club.

Before joining Esperance, Lokosa played in Nigeria Professional Football League with Kano Pillars where he won top scorer award in 2019 with 19 goals.

Reports from the British media claimed that West Ham United manager David Moyes is interested in uniting with the player again and want to bring him back to the premier league.

Moyes handed the 21-year-old, his premier league debut during his time at Sunderland, and he fancied him as the ideal long-term replacement for already departed Marco Arnatovic.

West Ham will face stiff competition for the signature of the player who is also under the radar of Glasgow Rangers.

Maja is reportedly not pushing for a move, having only joined the Ligue 1 club in January 2019, but the French club’s finances have been impacted by the coronavirus pandemic and they could sell to raise funds.

He has scored nine goals in 31 league appearances for Bordeaux, whose season was cut short in April because of the virus.

By admin in BR
Veteran league coach Zacary Baraje has backed the continuous stay in the Federation’s Technical department the Technical director Bitrus Bewerang, Siji Lagunju, and Deputy Director Technical Rafiu Yusuf in the Technical department of the Nigeria Football Federation following the proposed shakeup in the department.
Baraje speaking in a chat with www.brila.net said not until the Federation is able to really show that they are bringing better replacement that will clearly change the output and result in the Federation, he sees no reason why the current Technical officials should. E removed from the office.
“If they are trying to bring changes probably some people are campaigning, maybe we are having some ex players that have played abroad and see how things are run. If they come will they make the difference. If they can make the difference and things can look good for us and we will get better result, then they can make the change apart from that I see no reason why Bewerang or the other people should be removed now.”

Read more • Comments Off on Baraje makes case for Bewerang, Lagunju and other NFF Technical officials

By admin in BR
Member of the Nigeria Football Federation Executive committee and Chairman of the Nigeria Nationwide league Mohammed Alkali has stated that the non-removal of suspension on Sports activities has been a big hindrance with regards to planning.
Alkali speaking in a chat with www.brila.net said the football governing body in Nigeria has already earmarked a working plan on how they intend to have league football return but still will be handicapped no matter the plan with the current directive on the suspension of sports activities not yet lifted.
“The governing body of the league has already earmarked the working plan on how we are going to commence and how are going to end the league but the issue of not lifting the suspension on football activities in the country at least there is nothing we can do.  And by the time suspension is removed, we can then now look at how we are going to start our league and end it.”

Relief fund will be used according to FIFA’s guideline – Sanusi

By admin in BR
Scribe of the Nigeria Football Federation Dr. Mohammed Sanusi has stated that the relief fund expected from FIFA will be used according to FIFA’s guidelines and as such not one that can be channeled arbitrarily by the Football Federation.
Sanusi speaking in a chat with  www.brila.net said the fund have a thorough process that FIFA itself monitor and wants to be briefed on how it was spent. He added that the NFF have its own machinery set up to ensure strict compliance to the terms of reference of the funds from the world football governing body FIFA.
“Be rest assured that once the money is received from them, we will use it for the purpose it is meant to serve. We also have developed a system whereby even after they say do this do that by the time we finish we also send it to them and say this is what we have done, is it in order for us to go ahead. Once they give the go ahead we will do what exactly we are supposed to do. They are  coming to audit the account so they will tell you how they want the money to be used and they will want to find out if you have actually followed what they said you should do with the morning.”

The post Relief fund will be used according to FIFA’s guideline – Sanusi appeared first on Latest Sports News In Nigeria.