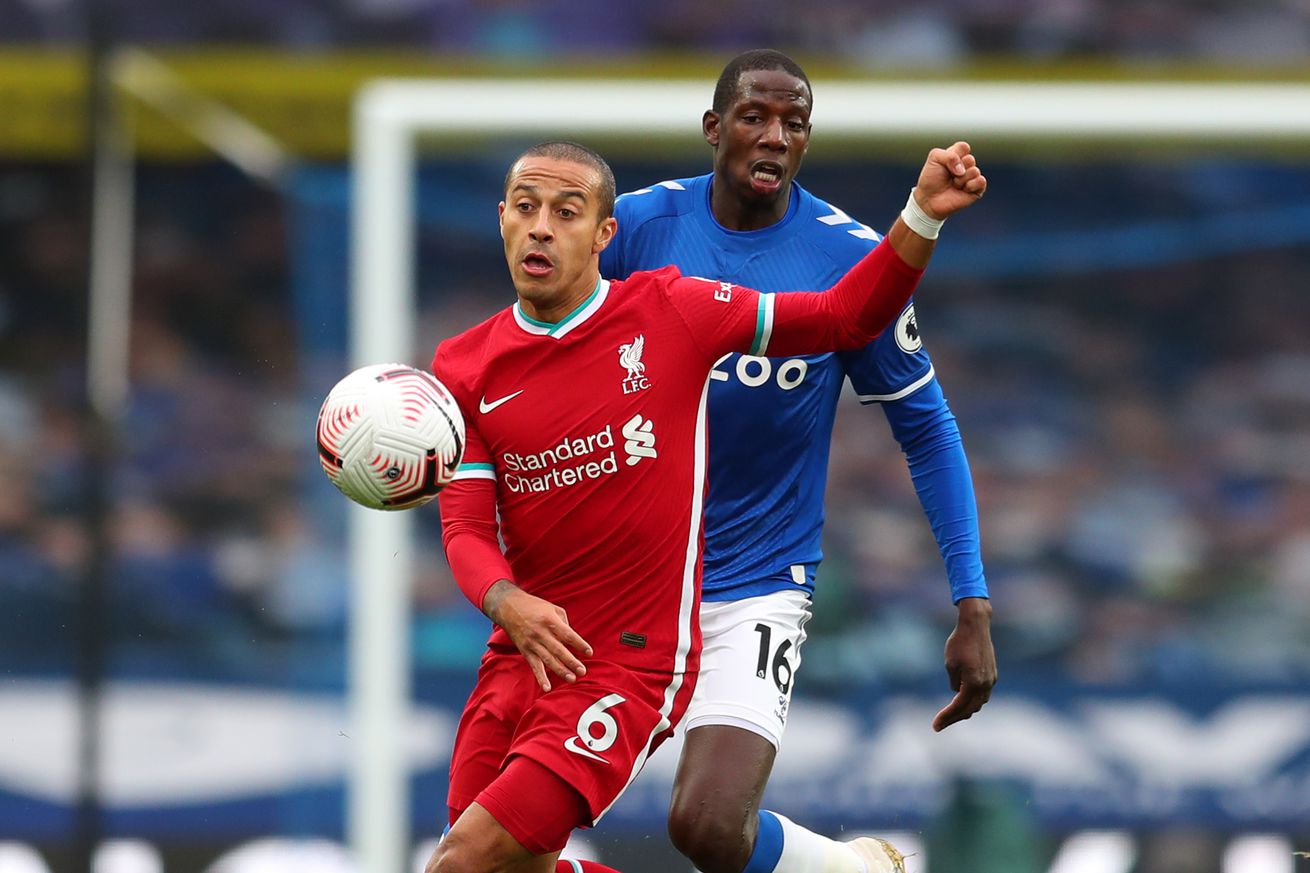 The Merseyside Derby has traditionally been a contentious affair, often marred by ugly tackles, and today was no exception. Liverpool twice took the lead, only to give up a tying goal just minutes later. The red side of Liverpool will feel particularly aggrieved to have had Jordan Henderson’s winner chalked off for a ludicrous offside awarded by VAR.

Join us as we try and separate narrative from reality of the match up and how it all went down in the end.

Midfield Maestros
Captain Jordan Henderson and Thiago both returned, from injury and covid quarantine respectively, and went right into the starting lineup. Henderson’s presence was immense all game, providing a stability and fire that had been missing. His attacking play, often overlooked, was present from the off, and he should have been awarded the game winner.

Thiago started a little slower, but he found the game midway through the first half, and his influence grew as the game moved on. His vision and passing is otherworldly, and it adds a new dimension to Liverpool’s attack.

Not to be left out, Fabinho was also quite good today, especially inside Everton’s half. He won several balls to stop an Everton break, and sprung quick attacks himself.

100 Goal King
Mohamed Salah has now scored 100 goals for Liverpool, celebrating in style with a wonderful strike. Only Roger Hunt (144 appearances) and Jack Parkinson (153 appearances) have reached 100 goals faster than the Egyptian striker. He is averaging a goal every 75 minutes this young season, having scored 6 goals in 5 appearances. He’s getting in great shooting positions, and could be in line for another huge goal tally this season.

Sadio Mane
Another player returning from covid quarantine, Mane created trouble for Everton all game long. The Senegalese striker lashed a shot into the roof of the net in the 3rd minute, and drew 6 fouls on the dribble, often in extremely dangerous areas. He also chipped in with 3 tackles on the defensive end.

Roberto Firmino
Still no goals from the Brazilian, but he was much more influential today than he has been all season. His touch was much better, and he had some fantastic combination play, both in the box as well as in transition. He’s still not at his best, but it was encouraging to see him much more involved.

VAR
Somehow, decisions from VAR continue to boggle the mind. It started with a horrible tackle from Jordan Pickford on Virgil van Dijk that caused the Dutch defender to leave the game with a knee injury. The tackle should have been a straight red card, but somehow the VAR official was apparently so engrossed in checking for whether offside was called correctly (in case a penalty should be given FOR THE FREAKING FOUL?!?!), he didn’t bother to check for the red card offense until the game had already resumed. It was an absolutely shocking sequence, from the initial non-call thanks to a quick linesman’s flag for offside, to the disaster of a review process. Jordan Pickford should absolutely be punished retroactively by the FA, but it will come as little solace if it does indeed happen.

Clarification on Pickford/Van Dijk…. we all get one wrong now and then.

Had it confirmed that the VAR, David Coote, did NOT check for a red card. Appears he was too concerned with the offside. #EVELIV

Liverpool were again adjudged to be offside in the lead up to a Jordan Henderson goal in the waning minutes of the game. Sadio Mane was the man said to be off this time, though no one in the broadcast booth or studio seemed to be able to see how from the freeze frame the decision was based off of.

Joe Gomez
The central defender was dropped to the bench to start the game, and was required to enter after van Dijk left with his knee injury. Gomez just looks like a man bereft of confidence. While van Dijk made a point of being physical with Everton’s danger man, Dominic Calvert-Lewin, Gomez continually dropped off of him even when support was present, leaving plenty of room for DCL to operate in. Depending on how long Big Virg will be out, Liverpool will very much need Gomez to get his confidence back.

Defensive Depth
Liverpool were already thin at the back before Virgil van Dijk went out injured. Fans rightly had their hearts in their mouths when Andrew Robertson had to hobble off for a minute in the second half as well. Thankfully, the Scottish left back was able to continue. Still, Liverpool are now in a situation where Nathaniel Phillips will likely be promoted to the bench of van Dijk is out for an extended period of time. Kostas Tsimikas is still out with a thigh injury, and no time table has been provided for his return.

“I don’t know where the line is where you can do offside. Yes, we should have won this game. The boys played a super game against a side with quality and confidence. Dominating from the first second is absolutely exceptional.”

Today marked the start of a very busy stretch for Liverpool, as they enter Champion’s League group play. The Reds travel to Amsterdam to take on Ajax on Wednesday before returning for three games at Anfield in the space of a week. Let’s all cross our fingers and hope for the best, but it seems likely Liverpool will be without Virgil van Dijk and Alisson for this next stretch of games.