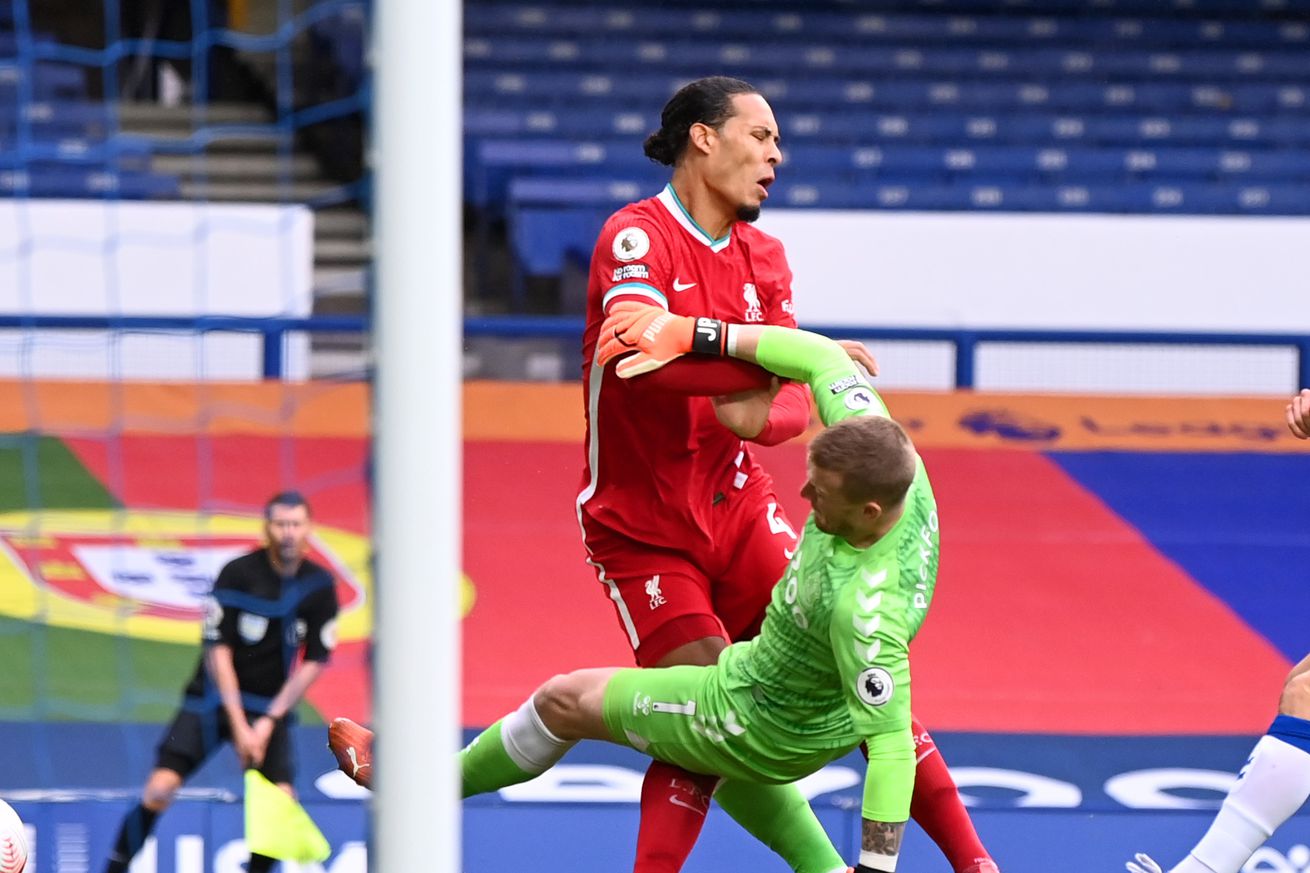 The was a Merseyside derby to remember…but not for anything good.

Joe Gomez gets dropped after his poor performance against Aston Villa and with the return from injury of Joel Matip. Adrian remains in the goal with Alisson still out for several more weeks.

Liverpool fans will be excited to see that both Mané and Thiago are back in the team after battle COVID-19 within the last few weeks. Additionally, after playing for England over the break, Henderson returns to lead Liverpool’s midfield.

GOALLLL! Mané 3’ – And Mané’s impact is immediately felt back in the team. He scores before your humble scribe manages to make her coffee. It’s Andy Robertson who picks up yet another assist.

The football gods giveth and the football gods taketh away. Minutes later, Jordan Pickford absolutely railroads Virgil van Dijk, taking him out of the game. VAR is a travesty in this instance, deciding that because van Dijk’s arm was offside, Pickford remains unsanctioned and in the game after that horror tackle. That is RIDICULOUS.

Van Dijk, on the other hand, has to be taken out of the game, hopefully as a precaution. Here comes Gomez, who must be in a very weird headspace. He was dropped for this match, only to be put on less than 10 minutes into the match, to replace Liverpool’s superstar defender in the Merseyside derby.

Goal 🙁 – Keane 19’ – After several sustained minutes of Everton working their way back into the game, Michael Keane scores off of a corner to take Everton level.

Let me take a sip of my coffee, guys!

Liverpool earn a freekick from a good position. It’s a long build up as the players discuss the best move. It’s Trent Alexander-Arnold who takes it. The shot forces a save from Pickford in the top corner, and the resulting corner is disappointing.

Thiago gets off his first shot of the game 33 minutes into the match, but the strike is well wide. That’s followed up by a break from Liverpool, but Mané’s shot in the box is wide as well..

The first half ends on even terms and with Everton somehow having 11 men on the pitch.

The second half begins, and that break was not long enough for me to get over how angry I am. Stupid derby, man.

But fine, we’re going again as Liverpool attempt to regain the lead from their angry, violent Blue counterparts.

Andy Robertson goes down in a tangle of limbs and takes far too long for my liking to get back up. It looks like Liverpool may be attempting injure their entire defense. Fun times. Robertson is deemed fit to play for the moment, so hopefully he just needs to walk it off.

Adrian does well to keep the game level with a save on Richarlison’s strike.

GOALLLLLL! 71’ Salah – Oh me, oh my! Just when I was getting supremely frustrated, Salah makes his 100th Liverpool goal a real cracker. Henderson’s pass is parried away by an Everton defender straight to Salah’s foot. Salah, in space, rockets it right past Pickford before Pickford, or I, could blink.

Matip nearly scores Liverpool’s third minutes later on a header from a corner. Pickford manages to extend his tiny arms far enough to make the save.

Firmino goes off and Diogo Jota comes on with a little less than 25 minutes to go in this match.

Goal 🙁 80’ Calvert-Lewin – Calvert-Lewin, who has been giving the Reds trouble all afternoon, scores Everton’s second against the run of player. It’s a counterattack that ends with Calvert-Lewin nodding the ball past Adrian. Liverpool missing Alisson in that move. And van Dijk. And also Alexander-Arnold, who was inexplicably absent as Lucas Digne raced up the flank nearly unimpeded to lead the break and cross it to Calvert-Lewin’s head.

Too little, too late. Michael Oliver issues a red card to Richarlison after a text book violent challenge on Thiago. What the hell are the Everton players doing today? They should be down to nine men at this point.

I can’t…what the hell is happening. Jordan Henderson gets the winning goal, but it’s deemed offside…somehow. I truly don’t know what part of the player is offside. This has been a truly horrendous, embarrassing showing for VAR and refereeing in general today. This game has been snatched from the Reds. And as a person who rarely blames the refs when the players have the ultimate control over what happens, I am utterly gobsmacked.

I have no words for the shambolic refereeing display I’ve just witnessed. I’m going to go back to sleep now. Liverpool split the points with Everton, and my head is splitting.